What are you looking for?

Jack Herer, the father of the modern hemp movement in the US, is gone. He died peacefully at his home in Eugene April 15, 2010. An army of one in the beginning, Jack began his crusade to legalize industrial hemp in Venice Beach, Calif. in the ’70’s and wrote the iconic hemp book, The Emperor Wears No Clothes

I remember Jack at the first Santa Cruz Industrial Hemp Festival in 1997, and would see him on occasion at festivals and events in California, gladly giving him some of my hemp clothing each time. He was truly inspiring. Without Jack, there would be no Dash Hemp, and arguably no hemp companies in the US today. 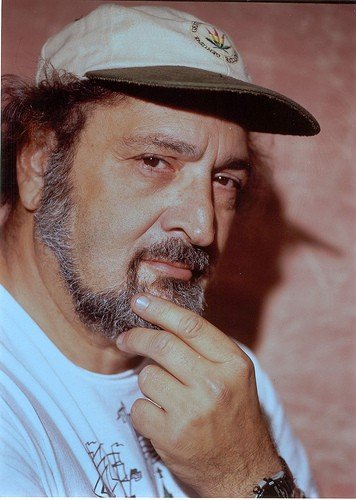 Jack Herer, father of the modern hemp movement, passed away last Thursday, April 15, in Eugene, Oregon, his wife Jeannie at his side. Herer’s health had been more than struggling since a debilitating heart attack in September 2009, when Herer was kept alive for over twenty minutes using CPR before help could arrive.

Herer’s greatest claim to fame* is his seminal 1985 hemp history expose, The Emperor Wears No Clothes. In a feat of self publishing success, The Emperor has sold nearly three quarters of a million copies in eleven releases, and has been translated into twelve different languages.

The sparks of marijuana mania were ignited for Herer with his first joint in 1969. At thirty years old, the ever headstrong Herer had been told by friends and family for years that the mellowing herb might be a good idea, but none of them could have predicted the effects that toke would have on the future of both the man and the plant.

Dropping out from his long standing Goldwater Republican status, Herer spent the early 1970’s re-establishing himself in the world with two head shops in Venice Beach, California and through a transformative friendship with fellow shop owner and pot advocate, Captain Ed Adair.

Herer published his first book, Grass, in 1973. The pot themed coloring book took off in the underground market as an instant cult classic. Within weeks of its publication, Herer began receiving letters from fellow stoners, asking if he knew that marijuana was loaded with benefits outside of its high, that it was also good for medicine, food, clothing and more?

The seeds were planted, but they didn’t fully take root until 1974, when under the influence of massive amounts of LSD, Herer and Captain Ed had the kaleidoscopic epiphany: hemp could save the world. Herer admitted in one of our interviews, “We were so stoned on the acid and we thought, ‘Holy shit, we’ll come down and laugh at ourselves,’ but we came down and we still thought so.” The pair pledged to work for the liberation of hemp until it was either fully legalized and all its prisoners set free, or the two turned 84, respectively.

The pair collected supporting data for the next twelve years. An outspoken advocate for voter rights on many fronts, Herer spent dozens of brief stints in jail, one of which provided him the time and righteous indignation to come up with the outline for The Emperor. The always candid Herer explained, “I went to federal prison in 1983 after refusing to pay a $5.00 fine for registering voters in a parking lot with only one building in it, which was a no-no and still is. The 14 days I was in prison I wrote the outline for The Emperor, so f-*k them,”

Herer’s manifesto is a deeply and obsessively researched compilation of hemp history, gathered up into the loving net of his and Captain Ed’s vision of ultimate world salvation via the plant, from eliminating the need to cut trees for paper — quashing greenhouse gasses in the process — to extending the average human lifespan. 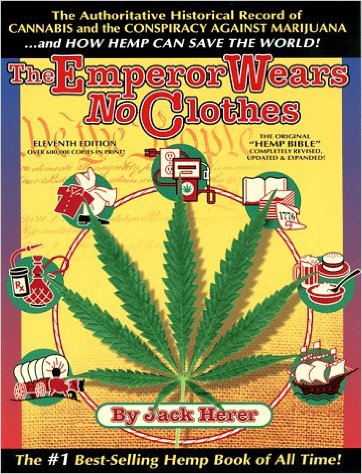 The heavy focus on deliberate government and corporate cover up of hemp’s excellence as a fuel, nutritional supplement, medicine, cloth, lighting oil, and so on, serves the inquisitive conspiracy theorist well, and carries with it a satisfying air of impenetrability. Herer’s offer to shell out $100,000 to anyone who could prove him or his research wrong has never been taken up.

After The Emperor’s 1985 publication, Herer toured tirelessly from coast to coast, distinguishing himself further as a key pot persona. He was beloved by the marijuana movement, and completely engaging onstage. Jack thrived on his connection to the crowd, on the stirring of their shared goals, the rah, rah, rah of a roomful of thirsty soldiers, whose cottonmouth could be quenched with nothing less than full-on reform.

In 1991, Wall Street Journal featured a review of The Emperor on its front page that launched Herer into a new wave of notoriety. Sadly, Captain Ed passed on later that same year. Jack carried on the crusade they’d begun, and he was no where near alone.

There were two things Herer was always certain to have on him: some of the finest marijuana available and an entourage. His passion and unwavering beliefs drew new activists like so much honey. Editor at HIGH TIMES Magazine, Dave Bienenstock, weighed in on Herer’s influential sway, “If I had a dime bag for every marijuana activist who told me Jack Herer was how they got started, I’d have a few pounds by now.”

Herer’s inertia came to a grinding temporary halt in 2000, when he suffered a minor heart attack and major stroke, which left him paralyzed on one side and unable to communicate for the next three years. It was a frustrating time for Herer, who wanted nothing more than to continue spreading hemp education in the brazen manner he was accustomed to. Through a mixture of western medicine, hemp oil, and therapy with the psychedelic mushroom, Amanita Muscaria, Jack was able to regain his speech and get back on the road by 2003.

His crusade continued on until the September 2009 Portland HempStock Festival, where he finished his, as always, fired up speech, walked off the stage, and collapsed from the heart attack that would in time take his life. It has been reported that the HempStock stage will be permanently renamed The Jack Herer Memorial Stage.

The “Emperor of Hemp” has inspired several generations of pot crusaders and hemp enthusiasts, and will continue to do so for generations to come. Those in the marijuana movement have him, in more than part, to thank, not only for their ferocity, but for their existence and subsequent successes. Since Herer aided Dennis Peron in the 1996 passing of California Proposition 215, thirteen more U.S. states and the District of Columbia have enacted laws allowing marijuana cultivation.

Jack Herer is survived by his wife Jeannie, six children, a brother and sister, as well as the millions strong across the globe who consider him a hero and have been touched by his friendship, dreams and perseverance. He was our pot of green gold and will be sorely missed.

The “Emperor of Hemp” has inspired several generations of pot crusaders and hemp enthusiasts, and will continue to do so for generations to come. Those in the marijuana movement have him, in more than part, to thank, not only for their ferocity, but for their existence and subsequent successes. Since Herer aided Dennis Peron in the 1996 passing of California Proposition 215, thirteen more U.S. states and the District of Columbia have enacted laws allowing marijuana cultivation.

*Though he is best known for The Emperor Wears No Clothes, many marijuana imbibers are most familiar with the “Jack Herer” strain of marijuana, a potent sativa named in his honor.

To read excerpts from The Emperor Wears No Clothes for free online, visit www.jackherer.com.